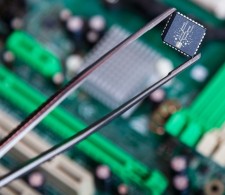 Mr. Waite said that InventionShare has been working with the inventors of Circuit Seed to develop completely new sensor applications called Sensory Seed that can do all sensing and signal processing in a single universal programmable chip.

We expect that our sensors will become an industry beacon, particularly for life-saving applications such as collision detection and avoidance.

Autonomous cars can be a driverless car or a driver-assist vehicle that is capable of sensing its environment and navigating with minimal human input. Autonomous cars detect surroundings using a variety of techniques such as sensors, radar, LIDAR, GPS, and computer vision. Advanced control systems interpret sensory information to identify appropriate navigation paths, as well as obstacles and relevant signage. Autonomous cars have complex control systems that analyze sensory data to distinguish between different cars on the road and follow specific road sensors for destination planning.

In the collision avoidance system area, the National Highway Traffic Safety Administration (NHTSA) and the Insurance Institute for Highway Safety announced, in March 2016, that manufacturers of 99% of U.S. automobiles had agreed to include automatic emergency braking systems using sensors as a standard feature on virtually all new cars sold in the U.S. by 2022.

Mr. Waite said, “What we have is the world’s best 'analog in digital' circuits and we help manufacturers make electronic devices with analog substantially better. Circuit Seed investigates, re-thinks, and successfully discovers novel approaches to circuit SoCs, topologies, and functionality resulting in silicon-proven optimal performance, lower-power, reduced area, scalability, and increased flexibility for deep sub-µm CMOS technologies. With Sensory Seed, what we have created is 'sensing' extended into a new class of very-smart adaptive sensors, enabling for long-term remote, battery powered or RFID sensor nodes that can be produced with significant cost savings and greatly increased reliability, flexibility and higher speed with precision. We expect that our sensors will become an industry beacon, particularly for life-saving applications such as collision detection and avoidance.”

InventionShare is now looking for strategic partners and licensees who want to implement the best technologies for consumer safety and reliability for automotive and other transportation technologies.