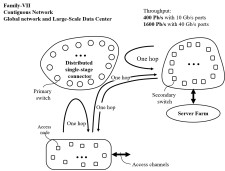 These patents represent the seventh family of AcceleRoute switches and include a contiguous switching system for a large-scale cloud communications network or a large-scale data center.

The AcceleRoute invention portfolio is nine invention families comprised of 19 issued US patents and 11 applications. The CTO is very credible, with over 100 patents filed and significant industry experience at Nortel. AcceleRoute addresses all the key drivers for data center evolution, namely performance, throughput and lower energy costs. A hundred per cent of control traffic and 80% of data traffic has only one hop; there is less network congestion and complexity; it is easier to manage and expand; and there is better utilization of ports and, importantly, much less power consumption and better overall performance. The technology can be implemented on a single or multiple router design as a data center or in a data center and co-exist with current technology.

Mr. Waite said, “We have this patent portfolio available now for those companies who are looking to produce totally new and unique architectures for small one-hop switches. Generally speaking, the more hops data must traverse to reach their destination, the greater the transmission delay incurred and the higher the cost. AcceleRoute’s less complex designs increase capacity and provide higher throughput, no queuing and less latency - which all lead to less processing time and processing costs, thereby reducing power consumption significantly.”